It turns out that planning to row across the Atlantic Ocean is life changing. Over 12 months before the start of the race, and before Caroline, Jess and I even own our own boat, we are have having amazing new experiences, meeting fantastic people and learning so, so much and all because of Status Row. One such example was my recent trip to Hong Kong. 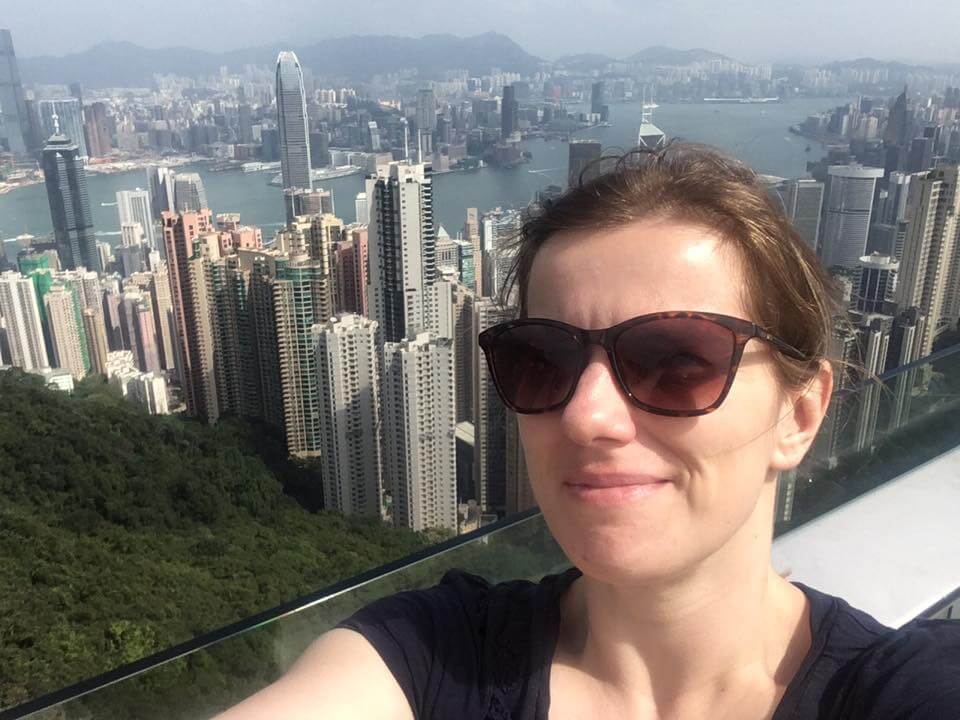 Hong Kong was very much in the news when I was growing up as it was the build up to the handover of the territory to China. It is my first memory of wanting to travel somewhere overseas and it became my ambition to visit before 1997. As usual I was a bit late (ok twenty years…) but I finally made it this month.

Now it wouldn’t be true to say that pre-Status Row I would have arrived in HK and headed straight for the excellent shopping. I’ve always been more interested in exploring and experiencing a new place. But what I wouldn’t have done in my preparations was google ‘Hong Kong’ and ‘plastic’. When I did, up popped Plastic Free Seas and two weeks later I found myself on a beach on Lantau Island with its founders. 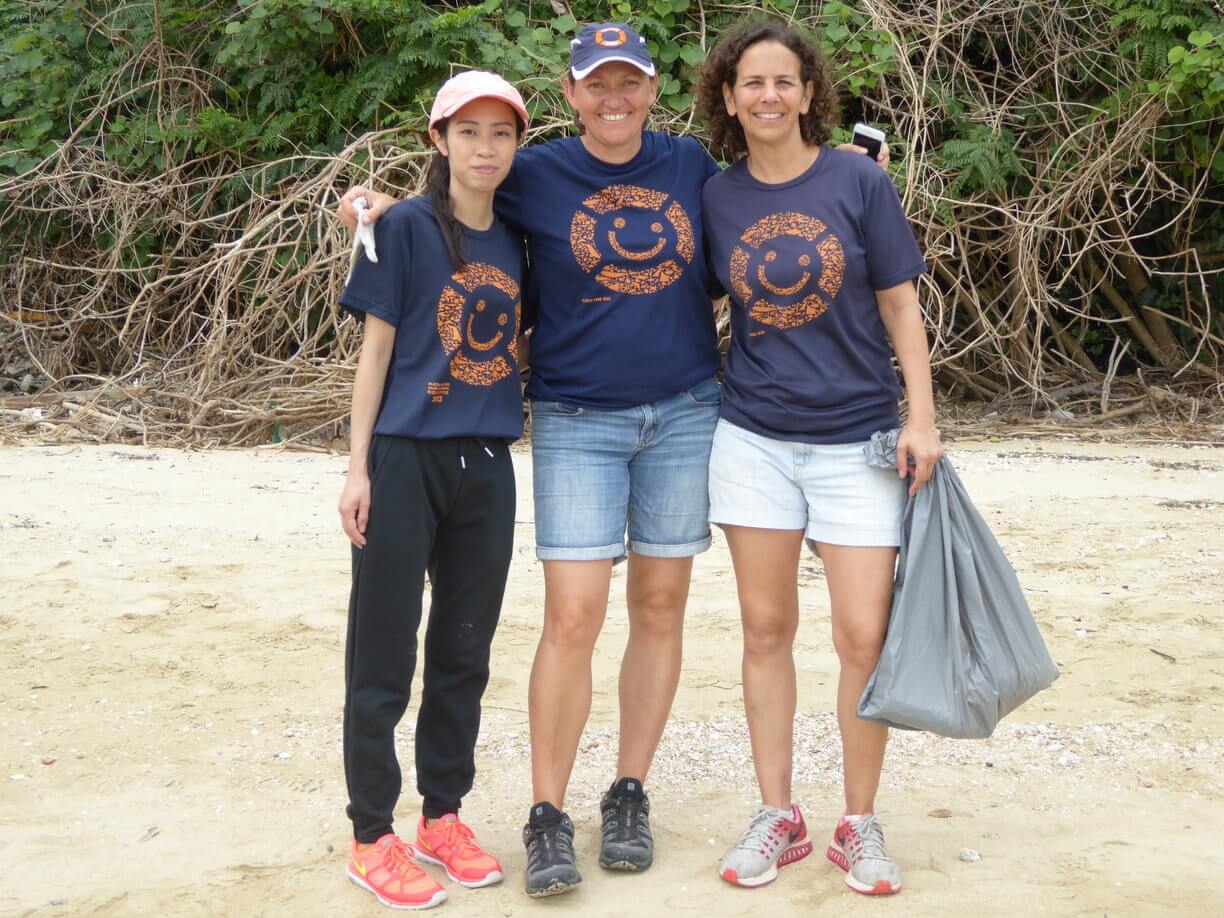 Tracey and Dana had been involved in recycling and beach clean up projects in their communities for 10 years before, in 2012, Tracey got the opportunity to sail across the Pacific with the 5 Gyres team to carry out research in the ‘great Pacific garbage patch’. That trip was the catalyst to Tracey and Dana deciding that, as important as beach clean ups are, the plastic problem must be stopped as source. So Plastic Free Seas was born and they have been doing amazing work campaigning and educating in the territory ever since. (They are also lovely people!) 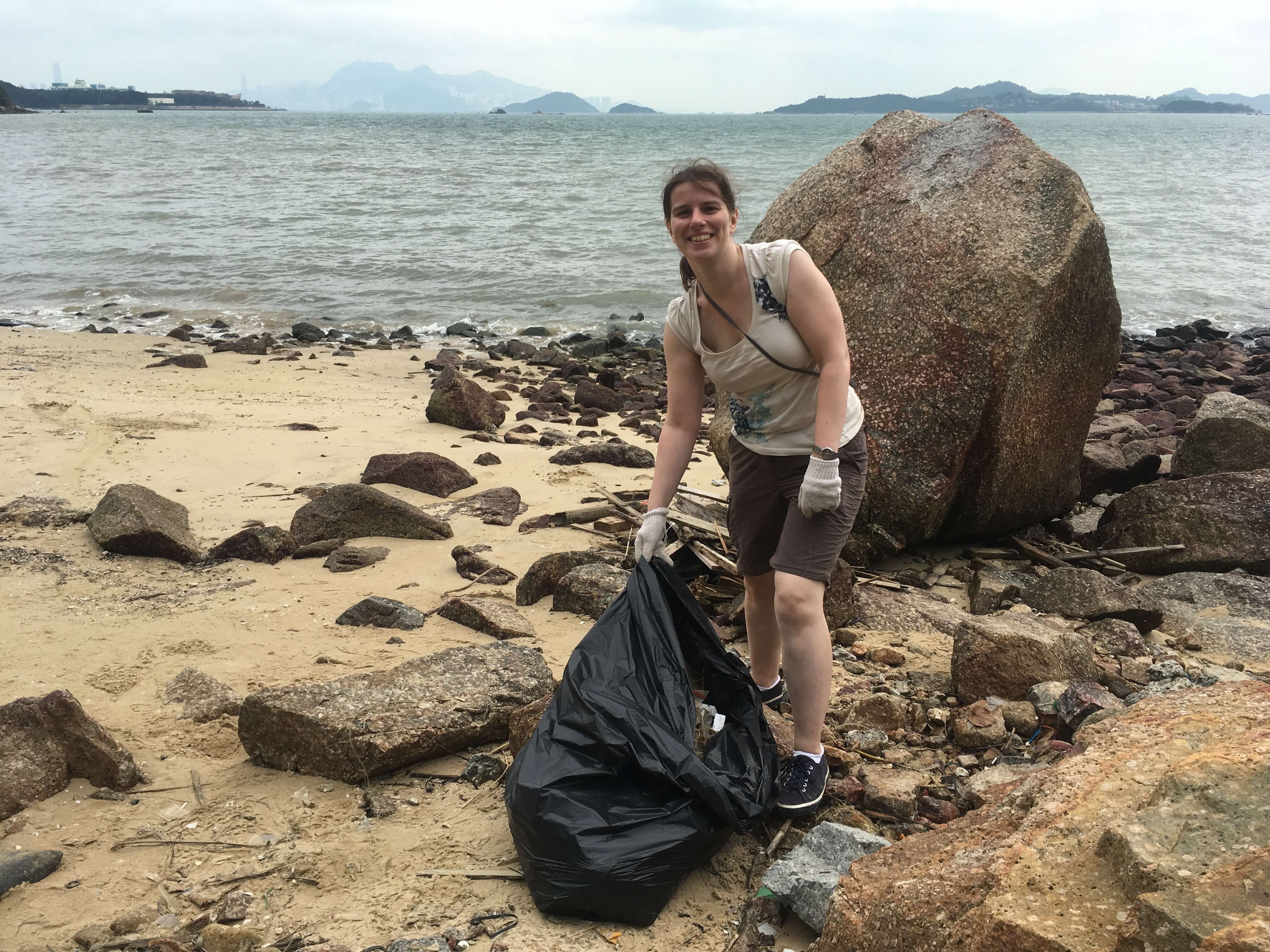 When I arrived off the bus at Discovery Bay, Dana directed me to the beach we would be cleaning. I’d be joining a corporate clean up - one of Plastic Free Seas initiatives is giving talks to companies and then taking the staff, and sometimes their families, out to beaches to see the issues in person. Dana asked me to stick to the rocks as ‘there isn’t much plastic on the beach so could you leave what is there for the children.’ Her words meant that the sight that greeted me at the beach was even more shocking: to me it was covered in plastic. The fact is that in Hong Kong, and especially following typhoons, beaches can be piled high with plastic, even up to a metre deep. But though things were not that bad in Discovery Bay for my visit, I spent nearly two hours on just a couple of metres of rocks and was still not able to clear it all. The big issue in HK is polystyrene – what I was witnessing was sand that was in large part just beads of polystyrene and therefore impossible to clear.

Later in my trip, I met someone on Lamma Island who told me the litter issue was not carelessness. Landfill sites are filling up quickly in Hong Kong so it was his belief that the ocean was a conscious method of waste management. I have no way of knowing if that is true. But I spent three days on Lamma, walking and kayaking- the beautiful coastline was covered in plastic, there was no sign of the coral reefs I was told used to be there, and as I paddled around the island, piece after piece of plastic floated by. 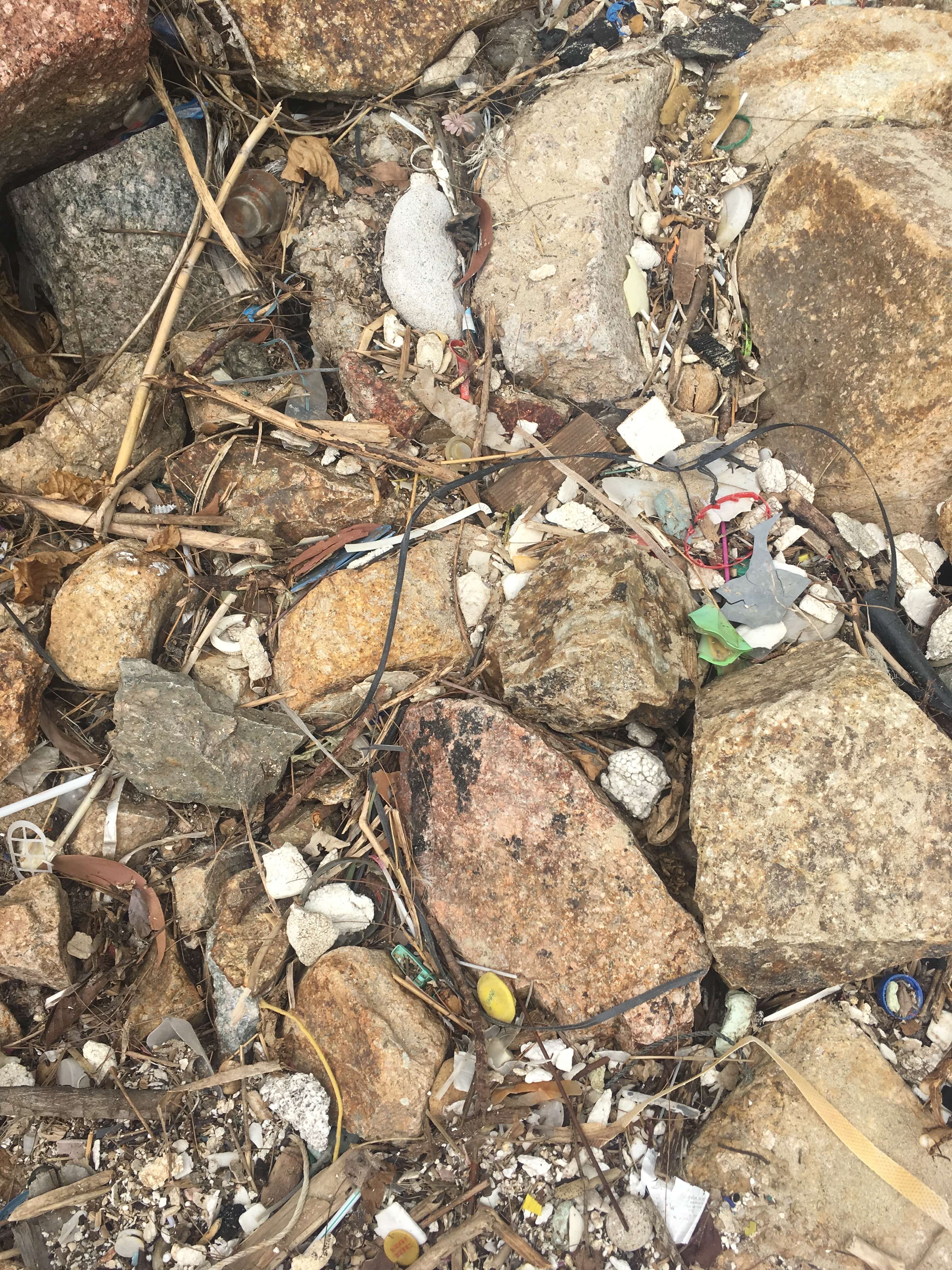 I’m aware that I can’t sit here and accuse Hong Kong when, although I personally haven’t seen the kind of litter I did on Lamma here, I still see plastic litter every day in the UK and I’ve heard from people who have seen terrible plastic pollution as they’ve sailed around the British Isles. In this age of people seemingly wanting to retreat into nation bubbles, the world’s big problems are surely ones we can only solve together. Borders are meaningless to the ocean. 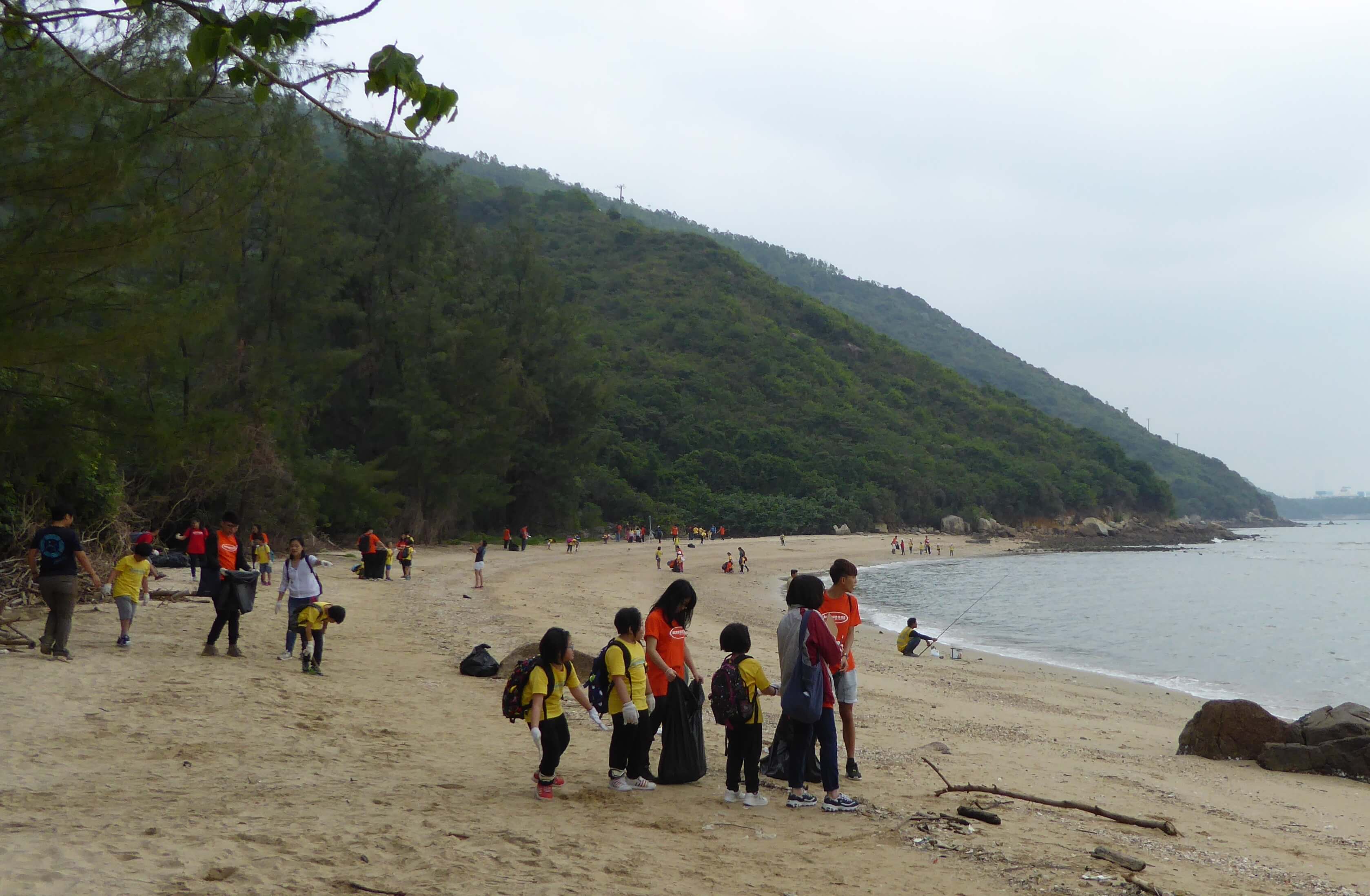 I can completely understand how for people like Tracey and Dana, fighting plastic has become a full time mission. Rowing the Atlantic remains a key mission for Status Row, but on my trip to Hong Kong I realised that my life was changing – when we reach Antigua in just over a year, it will be the end of just the first phase of Status Row. The wider mission to protect our planet will live on for the rest of my life.

If you live in Hong Kong, check out the Plastic Free Seas website and please support this fantastic organisation.

If you’re visiting, I’d highly recommend Sea Kayak Hong Kong. The kayaking experience is really great but they also exist to try and promote a love, and therefore care, for the environment amongst the Hong Kong people. (Having spent most of the time complaining about how much my shoulder ached, I was far too embarrassed to say I was planning on rowing the Atlantic!)